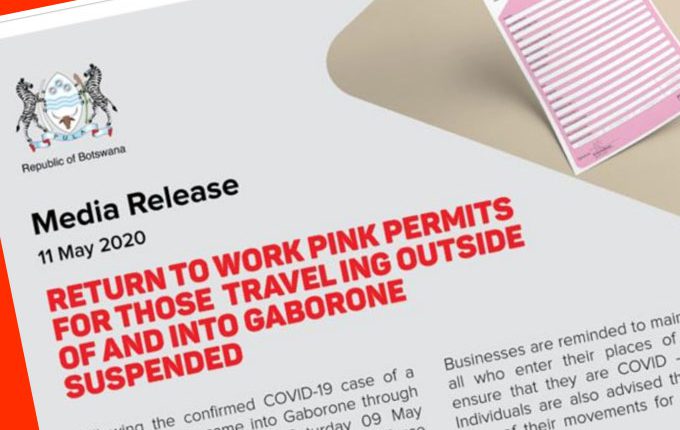 BOTSWANA’S PINK PERMITS – Not so fast!

“Just when l was thinking l was going back to Gaborone this week. We at Kgolagano College had submitted application for Pink permits. Sadly my dreams of going back to office/work have been halted.. No movement in and out of Gaborone until further notice.”

Matshediso Fologang, a management official at Kgolagano College in Gaborone shared his sentiments this afternoon on the sudden twist occasioned by the latest Covid-19 situation in Botswana, hardly 24 hours after the country eased lockdown restrictions.

Following endorsement by a special meeting of Parliament last week, the country had just issued guidelines on the easing of lockdown restrictions to effect this Monday when a new case of Corona virus was recorded, effectively putting over 150 lives directly under jeorpady.

Hitherto, non-essential service persons were prohibited from leaving their homes since the start of April, but President Mokgweetsi Masisi, taking advice from health officials, ordered that the lockdown restrictions be slowly phased out beginning Friday May 8, with 25 percent of the workforce permitted to return to work beginning this Monday. Through what the government termed Pink Permits, employers were to apply for these permits for the employees who would be needed to return to the workplace this week.

The country’s leadership was encouraged by the length of time Botswana took to have a new infection since the 23 cases they have had for some time, out of which 12 recovered and only one died.

However, a new case recorded on Sunday of a South African truck driver who was delivering foodstuffs in Gaborone has thrown a spanner in the works – forcing the health officials to immediately order a lockdown of the capital city where movement in and out of Gaborone will be prohibited for up to three days.

The country’s Covid-19 Task Force Team Coordinator Dr Kereng Masupu and his deputy Prof. Mosepele Mosele jointly addressed the nation via national television on Monday afternoon to immediately cancel the issuing of the Pink Permits and ordered that no movement in and out of the capital would be allowed.

This was to allow for a smooth and fast contact-tracing process to be carried out, with the places the truck driver visited between Saturday and Sunday leading health officials to about 150 persons. The truck driver had entered through the Tlokweng Border into Botswana on Saturday, where a molecular test was conducted and results only coming out Positive on Sunday. In between, the driver had been allowed to drive into the country, whereupon he had stops at Choppies Store Fairgrounds Mall, CA Sales where he delivered the goods, and at a nearby Engen Filling Station.

All these centres were closed on Monday for disinfection while the employees will be tested. The driver is currently under observation at Sir Ketumile Masire Hospital. A lot of people were already in Gaborone when the news of the new case broke and Prof Mosepele said it was his wish that no one would be allowed out of the city but conceded it would be difficult to achieve as some people may have left a lot unattended back at home besides not being ready for the extreme measures.

Fologang, a native of Ramotswa village some 30 kilometres outside the city, is one of the people who were greatly affected by this sudden twist. He wrote on his facebook wall: “This pandemic is here. Disruptive to individuals, the entire education system and to the economy.. This morning l came in to prepare for the return to the jungle world of klever. I have just unpacked my little bag…

“With this Tlokweng border case, I am now more worried. Under my normal routine, I never leave Gaborone without getting into the Commerce Park Engen Petrol Station by C A Sales.. Maybe I could have been there. I am scared seriously. Keeping extreme intra city social distancing. And will take time to come back to Kweneng Ward Ramotswa,” wrote the former South East District Council Chairperson.

Gaborone has since been declared a high-risk area and members of the public have been advised to minimise movements. Meanwhile, South Africa today recorded over 500 new Covid-19 cases to reach 10,652 active cases with 4357 recoveries and 206 deaths

IN COLD BLOOD Serowe police investigate murder of a woman