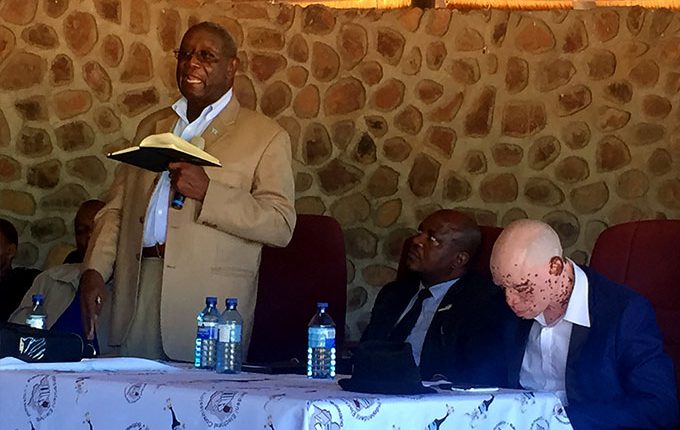 The EVM’s consultative meeting that was held at Marulamantsi Kgotla on the morning of March 25 saw several speakers take turns to denounce what they termed another imposition of president Ian Khama’s pet projects. Despite Seeletso’s repeated reminders that he was only a messenger on the Electoral Act amends, residents accused him of pushing the agenda of the rulers whose ultimate intent is to manipulate the election results to suit the Botswana Democratic Party (BDP). Marulamantsi councilor Seargent Kgosietsile, who was asked to give a vote of thanks after Seeletso’s deliberations, took advantage of podium position to ask the EVM Coordinator to resign with his dignity intact. “It is clear that you are only doing this for your own benefit. If you loved Batswana you would have not accepted this errand you call consultation when clearly decisions have already been made on the matter. The best thing for you is to resign,” Kgosietsile said to the amusement of the attending crowd. Other constituency councilors made it clear that they were not going to accept the use of the machines in their wards, and asked Seeletso to go inform his principals that the masses still see nothing wrong with the ballot paper that has been used over the years.

Seeletso said the P95 million that has been spent on election day to pay and feed engaged election officers will be reduced significantly as results will be out before midnight of the election day. Residents however questioned the wisdom of spending P150 million on EVMs and attendant education programmes when there are other service areas that could best use the money. “People will still queue on election day, what good are the machines to serve? I have been voting since the first elections when we were using envelopes and discs to the use of the ballot paper.  I am uneasy about these machines because like computers, they are bound to give technical glitches which may be exploited to favour some candidates,” a woman identifying herself as Dorcus told the gathering.

Seeletso informed the residents that he will include their concens in a report he is to make for his principals. He reminded the audience that he does not set dates for elections. This was after one resident sought to know the election  date for the Tlokweng Parliamentary bye-elections where BDP will slug it out with the UDC after the death of area MP Same Bathobakae last year.