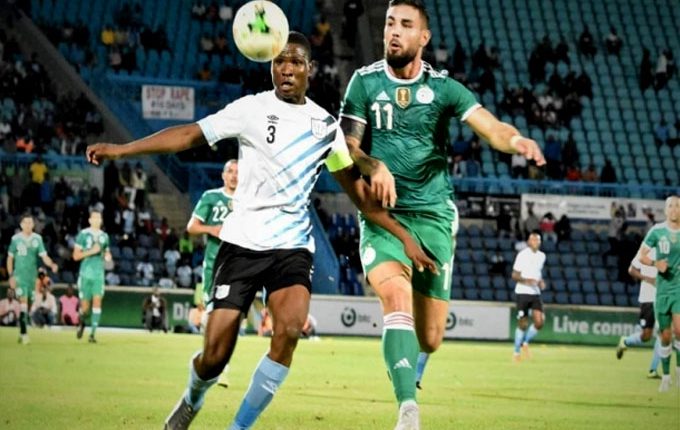 Youcef Belaili’s curling goal straight from a corner in the 14th minute handed Algeria a 1-0 win away to Botswana, their second straight victory in the qualifiers for the 2021 Total Africa Cup of Nations (AFCON).

The goal described by the local football fans as a silly goal that should not have beaten goalkeeper Kabelo Dambe proved vital for the visiting Desert Foxes who last week beat Zambia 5-0 in their opening Group H match.

The home side finished the match with ten men after Gape Gaogangwe was sent off with six minutes left for a second yellow card.

Belaili who had a blinder of a game in Les Verts’ 5-0 win over Zambia on match day one picked up from where he left, scoring in successive games as the reigning African champions continued clearing their route for Cameroon 2021.

The victory saw them move to six points with Botswana who are coached by Belgian-born Algerian coach Adel Amrouche remaining third with a single point off their barren draw with Zimbabwe last Friday.

Belaili swung in the lone goal with a well taken corner kick that sailed straight to the net, catching the keeper offguard. Islam Silimani who was handed a starting role after coming off the bench in last week’s game had a chance in the 23rd minute with a volley off Youcef Attal’s cross, but it went over.

But despite having the game’s early chances, the Algerians didn’t have an easy outing as they did against Zambia at home as The Zebras gave in a fight.

Botswana kept fighting and pushing but they couldn’t break the Algerian backline marshaled by Djamel Benlamri and Aisa Mandi. Mogakolodi Ngele came close in the second half, but his shot from range was wild after a hopeful build up from the Zebras.

Algeria made changes with Hilal Soudani and Baghdad Bounedjah coming on for Djamel Belmadi’s charges in a bid to add in some goals, but they couldn’t venture much upfront with Botswana forcing them to play in their own half. Zimbabwe and Zambia face off on Tuesday in the other group match. (CAFONLINE)

SILLY GOAL: Algeria cemented their lead in Group H by beating Botswana 1-0 in what many view as a silly goal