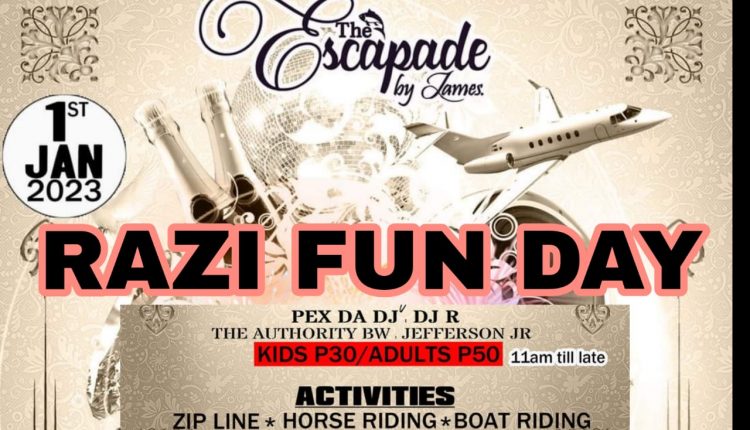 Batswana have every intension to bid 2022 farewell and usher 2023 in grand style as they will be engaged in a series of crossover activities set for different areas across the country and beyond borders.

While disciples will assemble at different spots to thank God for preserving them throughout the year and also make resolutions for the new one, night crawlers will also invade different entertainment spots to party the night away and usher in the New Year. Usually homesteads are not be left out as those not going out light fireworks, which have now become synonymous with the beginning of each New Year.

Goledzwa! Compliments of the new season messages will also be swamping phones to mark 2023.

The stages are set for 2023 and top on the list is none other than the annual Ekentolo event, which features a variety of games including traditional ones. This time around it will be held at Tsienyane Primary School play grounds in Rakops.
The event, which caters for elderly members of the community from the villages of Rakops and Mmadikola, will feature among others football, morabaraba, tug-of-war and netball. The first leg of the event was hosted by Mmadikola on Christmas Day, while Rakops will host the final lap on the first day of the New Year.

Still on Sunday, Culture Spears will perform at Chill Up Picnic at Mooks Plassie, between Vryburg and Dryharts. They will share stage with Mmaausi, Quincy K and Phat K, among others.

Tashy Gardens will host a New Year the Escapade by James All White Party crossover. The event caters for children and adults. Day time activities will include horse riding, boat riding, zipline and board games. The entertainment lineup will be headlined by Casper the DJ, FatshMan from South Africa and DJ Future. The event will start at 10am on December 31.

A New Year’s Eve party billed for Thuntsha at Mowana Park in Phakalane will start at 3pm and will be taking the entertainment lovers back to house of blues with legends of the disk. The event’s entertainment lineup of DJs will feature Choto, Otis Fraser, Sips SA, Robbie Rob, PJ the DJ, Salim, Oscar B, Spinz, Mr. O, Trax and Mcjon. The theme of the party will also be All White.

The village of Letlhakane will also host the nineth annual crossover event at MP for Boteti East, Sethomo Lelatisitswe’s farm. The event will start at 10am on New Year’s eve and the entertainment lineup will feature local DJs. Needless to say, dress code will be All White.

The Annual Kgatleng Choir festivities hosted at various venues will be coming to a conclusion on New Year Day.

On Christmas Day, Rangers hosted Tloutsoga at its field in Artesia, therefore the latter will be the hosting the final lap on New Year’s eve at Mmabe. Sedibelo will also host Moologe at Mabolaelo while Seshoboloko will play host to Matlapa.

The #Social Gaborone will at Masa Centre at CBD in Gaborone present DJ R & The Bois Live Band. The night of live gig, entertainment and dance into the New Year will be hosted by DJ Zaleem. The event will start at 6pm on New Year’s eve.

The village of Mogoditshane will on January 2, host the annual Matlolapata kasi flava football tournament at Solomon Dihutso grounds.

Dros at Molapo Crossing in Gaborone will present a New Year’s Eve party with DJ Ezra and friends featuring music and dance at the lounge side.

Fora farm will host O Foo Ke Fano 2022 on New Year’s eve with gates opening at 12noon. The event will feature, among others, the host Franco, Naisi Boy, Beauty Queens, Zolasko, Tyte and DJ Sly. In Gaborone, Elements of Glory Revival Church will present Crossover to 2023 service of night miracles, signs and wonders, with Prophetess Mumsy as the host. The event will be hosted at Elements of Glory Revival Church New Auditorium in Broadhurst Industrial.

The Gospel of God Grace Ministries alias 3G Ministries invites members of public to its annual all white crossover candle light event with Prophet Cedric at the National Stadium in Gaborone. The service will commence at 4pm.

Light to the World Church with Pastor Lebone Mogami at Block 3 Industrial, Gaborone will host a night of prophetic launch and definite crossover into 2023. The event will feature DJ Unction, Silver Psalmist and Light Voice of Worship and the service starts at 10:30pm.

For the Kgalagadi North region, African Evangelical Church invites public members to an All White all night cross over revival, which will start on New Year’s eve at 8pm with pastors Leepo Leepo and Bakang Mmu as well as Apostle MJ Moori and Prophet General Mokweni alternating the pulpit.

Mike Montshiwa’s killer yet to be arrested

Intolerance in many countries, including Botswana…