weird Why do women have this weird appetite for lumps of soil? 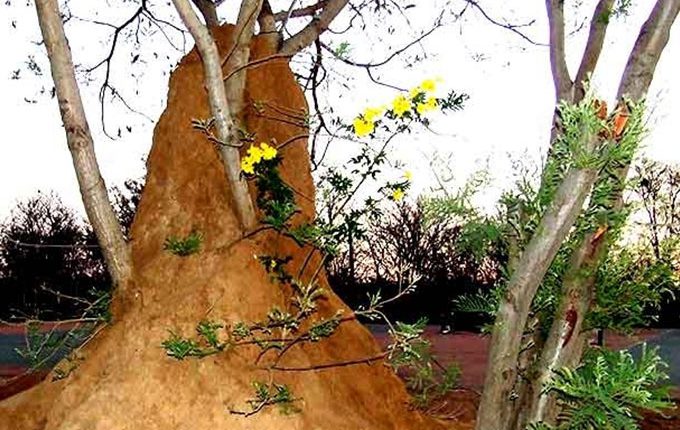 Most women in Botswana walk about with muddy stomachs, and Pula24 found out that they cannot really say why they particularly like eating dirt lumps of soil.

They will go the length and breadth of vast lands just to get their hands on that piece of dirt ball. And they would not mind going the extra mile if they have to. When a teacher at a primary school in Shadishadi recently told of how her colleagues do not think twice before sending pupils out of a precious learning session in the classroom for an expedition to bring back the seemingly irresistible lump, it was clear the allure of this earthly delicacy is enough to bury all logic, common sense and morality.

A day does not pass without the sight of notable women chopping off at a termite mound near the old ministry of environment, wildlife and tourism headquarters in the government enclave.  Just near what used to be called Motheo Lodge in Gaborone, another  termite-ravaged tree oozes with the good tasting soil. Not only do termites cluster around the tree but women also perennially swarm the place to collect chunks of earth – for their stomachs.  An anthill behind the football pitch goalposts at Ledumang Senior Secondary School in Gaborone has also not escaped the insatiable earthy appetite of some female soccer players from Big Sisters Football Club that trains there. No practice session there begins before the soccer stars have mined a few lumps out of the towering mound. Watching them passionately brush away a few unwanted twigs from their dirt lumps before mouthing them is awe-inspiring. Ask them why they eat the soil, they just smile contently and make an offer of a lump before challenging: “Have a piece and you will find out.” There is never a sensible answer, with the more informative of the lot only saying they do it because they see others doing it.

It surely is a curious and mystifying indulgence, even more pronounced in pregnant women who many respondents cite as the most guilty. For them, it appears to be just a feat of inexplicable craving which is difficult to discern. It gets even more intriguing, because 33-year old Tumelo Abotseng of Ramotswa – who only six months ago was blessed with a baby boy – can neither find answers into why she particularly could not survive a lengthy spell without the earthy delight while pregnant. “Now that I think of it, I can’t really recall why I wanted the soil that badly. It is something that just happened, and I never considered the possibility of hazardous results,” states Abotseng.

It is a world wide phenomenon, and as many mothers will attest, pregnancy has a way of occasioning some weird form of appetite in women. It is common to hear one craving a strange combination of pap and watermelon; or ‘motogo wa ting ka seswaa sa katse – and someone has to run around to satisfy the woman’s craving. But the common thing among women is geogaphy – the eating of dirt, clay or earth.

The notion that ‘cleanliness is godliness’ is so remote in the women’s minds when they crave the dirt. They just stuff it in their mouths with unfathomable zest. Most who were asked to say why there was so much love for soil among them only acknowledged the passion but could not say why the dirt-eating habit was so common and utterly satisfying. A good number of them could only give speculated answers – among which is the desire to supplement levels of iron in pregnant women. No scientific reinforcement of the theory could be obtained as most in the medical field said the soil would rather lessen the iron content in the body.

Others however contend that clay has a high mineral content and is often rich in calcium, iron, copper and magnesium.

Margaret Mabjeng says eating soil cost her a career in medicine. “I ate soil as a Tirelo Sechaba Participant and after completing the national service in December, I could not pass school medical tests as doctors found I had Tuberculosis  which was attributed partly to the soil. I could not start my Pre-Entry Science Course in January and was told to wait for the following year. I decided to start a different course that August,” she said.

However, a medical practitioner with Marina Hospital, Onalenna Mogapi who is a Theatre Nurse working mostly with surgeons, refutes that the TB could have been caused by the soil meal, saying Margarette could have acquired it from some infected person. Mogapi however says there is no health benefit in the eating of the soil despite claims to the contrary. Her chief concern is that the soil consumption at best exposes one to infections such as tetanus – a condition where muscle fibres, especially the jaws, are subjected to prolonged contraction and spasms.

Mogapi also says the habit could lead to constipation and other internal complications that however happen on rare occasions. Whereas some people have claimed that there could also be birth complications related to the accumulation of dirt in the womb, the medical practitioner dismissed this as untrue, saying under no circumstances can soil consumed through the mouth enter the womb, “unless one was stuffing the soil into herself down there,” she said.

In fact, Mogapi has not heard of any birth complications resulting from the consumption of soil. But she has advice for those who cannot stop craving the filthy delicacy. “Craving for soil is usually a sign that one lacks one or more minerals in the body. The craving doesn’t just happen, but most of the time it is because one mainly lacks iron. It is thus important for women to get in the habit of doing a full blood count at hospitals so that they timely receive the right supplements. Again, if they know themselves to  crave the soil a lot, or even charcoal, chalk and ice cubes, they should eat a lot of green leafy vegetables and red meat,” she advised.

Women, especially of child-bearing age, are particularly prone to this habit because they lose a lot of blood through their monthly wash-outs. Men on the other hand are said to usually have a lot of blood and therefore would not crave soil because their iron levels remain intact. Albertinah Milton, a retired teacher and cycling enthusiast abhors the habit with a passion. “Strange things happen all the time. Some people relieve themselves on those soils and I don’t think it is a healthy habit at all,” she said.

A church enthusiast who opted for anonymity added, “Pentacostal churches that focus on deliverance say eating soil is demonic; that one would usually be possessed by the snake spirit. How that spirit enters the person I don’t know. All I know is that rain often enhances the craving in women as they say the smell of wet soil is simply irresistible.” [Edited – First published here in 2015]

Mathokgwane is an exemplary figure