SHAMEFUL HYPOCRISY Intolerance in many countries, including Botswana – Khama 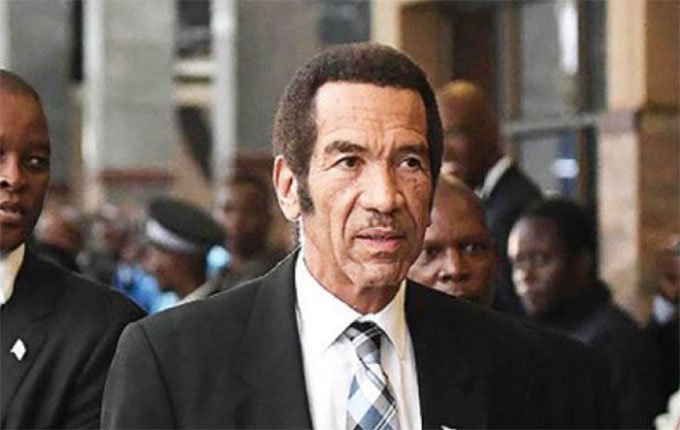 Tomorrow in the United States of America will be the funeral of someone none of us knew or had heard of until very recently, George Floyd, a citizen of that country of African descent.

He lost his life as a result of racial intolerance which has long plagued America and has been fueled by white supremacists like Donald Trump.

But intolerance of one type or the other has been in existence worldwide and been responsible for the deaths, brutality, harassment and intimidation of citizens by states for a very long time. Be it intolerance of ones race, like for example in the days of apartheid South Africa, or even now in America and China, or intolerance of ethnicity as with the genocide in Rwanda and now still in Cameroon and again China, or religious intolerance as in Nazi Germany, and now against the Palestinians and still in China, and last but not least political intolerance which has happened and is still happening in many parts of the world including China and has raised its ugly head in Botswana as well.

Therefore when some countries who continue to engage in brutality and harassment of their own citizens then issue statements condemning the killing of George Floyd, and when Presidents have their Cabinet Ministers stand to observe a moment of silence, it is shameful hypocrisy. Going forward you should keep monitoring these countries as they will continue these unlawful acts and thus prove to us all this hypocrisy to be true.

His Excellency the President of the Republic of South Africa Mr. Cyril Ramaphosa recently called on his security forces to go out with love in their hearts and not to treat fellow South Africans as the enemy. These words were comforting, uniting, reassuring and the words of a true leader. More importantly he meant what he said. What a good example to follow.

So, coming back to America, the first step towards ending racism there is for Americans to vote out of government in November this year, Donald Trump, Mike Pence and Mike Pompeo, who are the three entities, with their allies, that constitute an axis of evil, along with their posse of republican politicians and their lynch mob of supporters. This will allow the USA to begin to end such injustices.

There have been too many of these tragedies by state actors and Trump’s white supremacists, like that of the execution of Ahmaud Arbery, shot and killed whilst out jogging recently. To these and many others who died only because of the colour of their skin, may their souls rest in peace.

It is time to put an end to the violations of our Constitution, our laws and Oaths of Office – Ke Nako.

So for me tomorrow, as an expression of solidarity with African Americans, on the day George Floyd is buried, I will not be standing to observe a moment of silence, but instead taking a knee to demonstrate that Black lives matter, and indeed like all lives do everywhere.